Developing the repeatable Part 2 - The arches 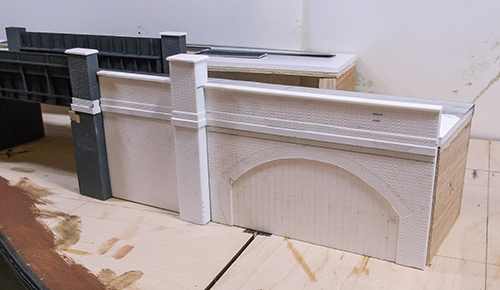 Now for the REAL challenge - the viaduct the railway runs along the top of. Unlike the road, these will be at least visible and people might even look closely.

Unlike the prototype, I have to contend with baseboard joints and using existing arches rather than starting from scratch on a cleared site. I don't want a break in the middle of an arch  for a start, it will look more natural between arches and I can invent a drainpipe to distract the eye. The model is modified to fit the boards as it is, so I feel justified in taking a few liberties with the design.

I think this is recognisable from the prototype if slightly simplified. The 5 rows of bricks on top of the stone line are toped with a 45 degree angled brick that would be difficult to model neatly for a start. As I said yesterday, keep it neat and no-one will (hopefully) spot the cheat. If they do, tough.

I'm filling in the arches with workshops as I think that's how they were, and more importantly, working out what to do under there if I don't fill them in makes my head hurt.

To make matters more interesting, I'm modelling both sides of the viaduct. This test is the rear version. I think we'll want to take photos from this side occasionally, so no skimping for me here!