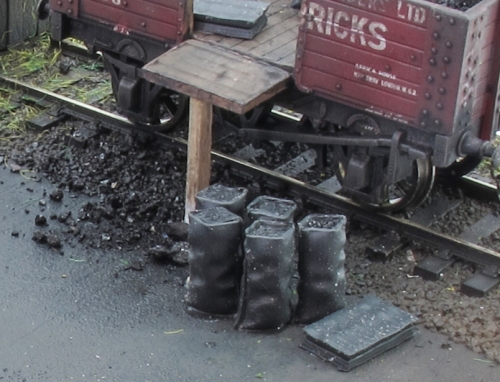 When I was in Canada, I picked up a small bottle of Mod Podge. It's a glue I'd read good things about in American Magazines, but had never seen for sale in the UK.

I'm not sure what's in it, but it looks like PVA but dries perfectly matt. Using it for sticking details on to a couple of dioramas recently, I was really impressed with its invisibility when dry. The grab is quick, so not too much propping up is required either.

Obviously, I hadn't been paying attention as you can buy the stuff in craft shops and Hobbycraft. In fact there is a whole range of them to play with, so I've acquired a new, big bottle and some antique finish stuff to play around with.

First, I need to read the ModPodgerRocks blog.

Update: Early readers will have spotted that despite being written on the bottle in large, easy to read letters, I insist on call this stuff Modge Podge. I've updated the blog, correcting my brain isn't quite so easy.

I discovered this recently too. The matt stuff is great for scenery, tree foiage, and I am told ballasting. The gloss makes great water, see my Loctern Quay river, cheap and easy.

Propping of wagon doors was not allowed by most railway companies, that is not to say it did not happen, the risk of door falling down if wagon moves. Another way to get killed was to carelessly open a wagon door like that with a crowbar to lift the catches causing the door drop suddenly, the consequence of being pinned under the crowbar can be imagined.

Some lad'll be in trouble. Yes, sweep every last ounce of coal out of the wagon but not onto the ground, into a sack. There's enough coal there to keep your granny going til November.

Spot on about the prop. I mention this in the article. People forget how dangerous the railway used to be when they rant about 'elf and safety.

And yes about the spilt coal, although the wagon is still being unloaded so doubtless "the lad" will be handed a broom and told to deal with it!