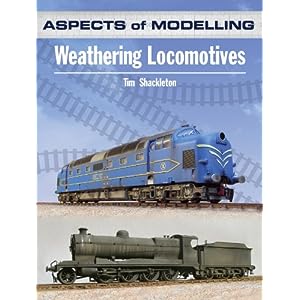 The latest in the "Aspects of Modelling" series from Ian Allan publishing is the well publicised  Weathering Locomotives by ex-MRJ editor, Tim Shackleton.

Any book on model railway weathering is always going to be compared with "The Art of Weathering" by Martyn Welch. The later is seen by many as a bible of weathering techniques. Most fine scale articles include the phrase "Weathering techniques from The Art of Weathering blah blah blah". Now it is an excellent book and my copy is well thumbed, but the methods described are IMHO more suited to 7mm scale models and larger. Trying to apply them to 4mm and below risks over-cooking the model. The detail needed in the smaller scales simply isn't as great as you are effectively viewing the trains from further away, which softens what you see. It's not for the time-starved modeller either.

This is where Mr S's book scores. He takes a more practical approach for the 4mm workers. For a start, his palette has only 4 colours on it: Matt White, Matt Black, Matt Leather and Metalcote Gunmetal. All are obtainable from a reasonable model shop. You will need an airbrush though, and apparently a pretty good one. My trusty Badger 150 gets a mention but really I need something double-acting. The spray isn't the only tool mentioned, lots of scraping and brushing to move paint around enters in to the task so prepare for a trip to the makeup counter if you want a full set of tools - although doubtless a trader or two will have been to Boots and then re-sell the results on their stand at a show for a decent markup.

Much of the book is spent explaining how weathering and dirt affect locomotives at various stages of their life. Whilst using photos as a reference is mentioned, this is an excellent way of explaining what you are seeing in a photo. Most of the time people tell you to model what you see. I remember my art teacher doing this for drawing and while I got the idea, turning a 3D item into a 2D sketch of any quality always defeated me. I quite enjoyed this part of the book as it's well written and a good read.

There are a number of worked examples showing dirt being applied to various locomotives. Mostly this involves airbrushing paint but American "Filter" paints are also tried. To be honest, I didn't think the results were that great on this one. The 08 model didn't look much like the photo at the start of the piece - but I can see the idea and even if I don't want to copy the technique, I know I'm not interested so have probably saved the cost of the book in materials.

Photographic quality is excellent throughout, not something to be said for The Art of Weathering which Wild Swan produced largely in black & white, not that helpful bearing in mind the subject !

One point I would disagree with the author on is not wearing a face mask while spraying. I know he normally works outside and suggests that this allows the vapour to dissipate, but I'd argue that you suck air in from a reasonable distance, certainly the same sort of place that the airbrush is laying paint. Maybe I'm just over-cautious, but I don't see a spray mask as an optional extra.

Overall, I'm happy to recommend the book. I paid good money for it and feel it was well worth it. If nothing else, it is an enjoyable read which provides plenty of food for thought even for someone who has been weathering stuff for years.

Buy Weathering Locomotives from Amazon
Posted by Phil Parker at 1:52 AM