How much are old model railway magazines worth ? 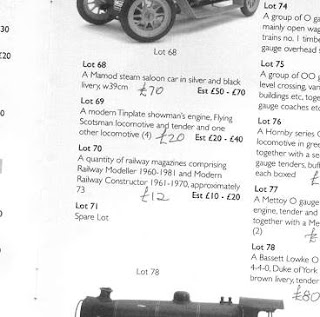 In general - nothing much.

MRJ tends to have some value, probably 50% of the cover price unless you have a very old or rare copy, Issue 0 tends to do somewhere over a fiver on eBay, but even the modern ones will do 3 quid each.

If it's a mag I have a piece in then obviously the value starts at priceless and works skyward. A complete set of Hornby Mags is said by some to be worth more than Lichtenstein.

Railway Modellers ? Can't give 'em away if you look at the piles of unloved issues cluttering most club second hand stalls. Being the biggest seller in the market and that market being full of people who don't throw precious toy train literature away, there are millions available.

Which is why the auction held at the Leamington Locke & England on 28th April was a surprise. Looking at the shallow box containing at most 3 years worth of mags from the 1970's, I expected to see NS (No Sale) noted in my Dads brochure. Instead there had been a veritable bidding was which left the happy owner £15 (including buyers premium) worse off and with a heavy pile to carry out back on the bus.

I used to strip out the ad section to reduce the bulk of my Railway Modeller collection but the decided on our last house move to whittle it down further by only keeping the editions featuring iconic layouts such as those by Peter Denny.
I do have the complete collection of MRJ including No.0 and don't intend to vandalise those!

I've reduced my RM's to the interesting articles and files those in boxfiles. That keeps the pile down and makes the good bits easy to find. With RM, just removing the adverts makes a big difference !

The only caveat is that I keep an intact copy of every magazine I've had something published in. This now gives me a happy problem that this is a significant pile now.

And MRJ, yes I have a complete set. Fot a long while I wished they would go bust just so so I could have a difinitive collection. Some are even in genuine MRJ binders and like you, I don't intend to vandalise them.

I went down the "throw out the ads" road, but still ended up with too many magazines! I eventually threw them all out, but kept early RM's from the 60s and a load of MRC's which had some interesting things in.

The older the magazine, the higher the price!

I was lucky enough to come across a pile of MRC and Model Railways from the 70s/80s and was surprised at how good they were.

Heaps of articles about scratchbuilding, and heaps of plans of pre-grouping and other interesting locos and stock.

I was browsing through them again the other night and it occured to me they may well be better than a lot of issues of MRJ.

I don't think the old RMs are quite as good, but still had some interesting bits.

I don't know that one, but I suspect the answer is very little.

I have over 95 railway modeller magazines dating from september 1966 to August 1974 wondering if they have any value?

Again - very little. If they are nicely bound then you've a better chance as people like the bound sets. Lose - you are probably going to have to give them away. Try your local model railway club or preserved railway - that way they will at least do some good. Unless you live near Leamington then don't bother, we recycled some from that era last year I'm afraid.

Hi - I've got 40 great condition Hornby Club railway magazines issues 2-80... do you think that's worth much?

Sadly, no. You could try to sell them on eBay but the postage would be many times what you'd get for the magazines. If you have a local model railway club, they would probably appreciate them as a donation but the collectors club mag isn't great so I can't see anyone wanting to pay for them. Sorry.

If you don't wind shipping, then eBay. Otherwise, I'd see if someone like Warwick & Warwick can put them into railway sale. You won't get a fortune but if the buyer isn't going to have to pay delivery, you'll do a bit better.