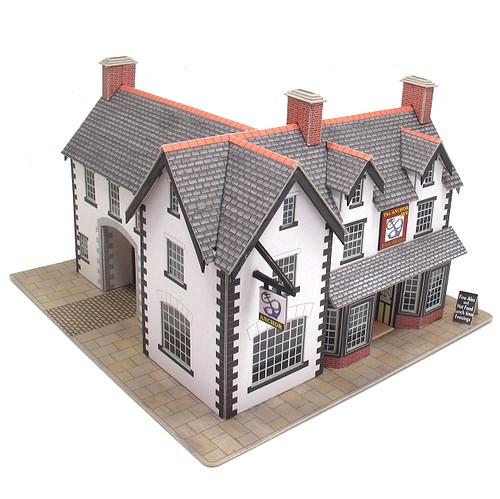 While on holiday a couple of weeks ago, my Dad took a Metcalfe card kit to amuse himself with. You need something to do in a Cornish caravan if you aren't to overload on cream teas apparently. 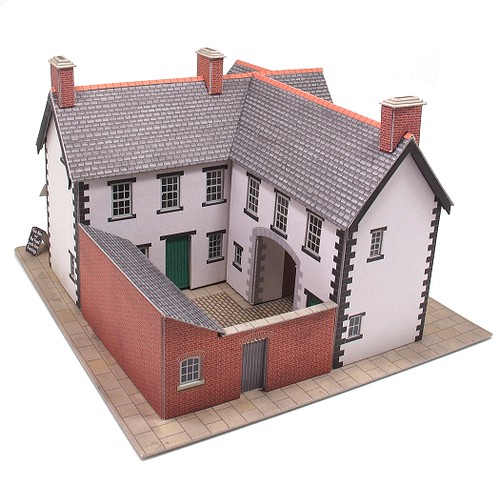 On his return, the model was mostly assembled, just needing barge boards and chimneys. These are now attached and the result is a pretty handsome building in my opinion. 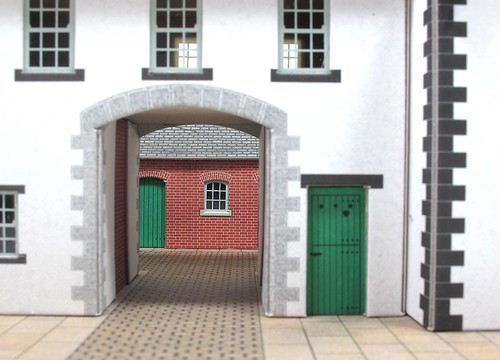 The kit was apparently well designed and more importantly fun to put together. OK, so it's not the most finescale thing out there but then would spending hours prodding computer chads into position provided entertainment as pleasant as seeing the 3D structure appear quickly and painlessly? 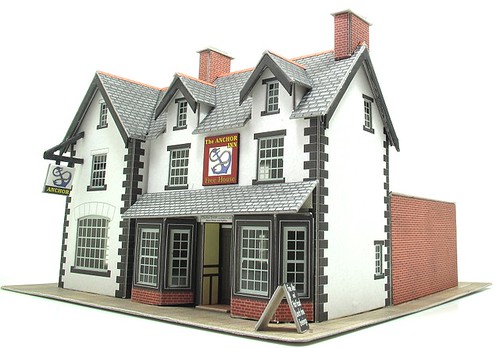 Looking at the model though, I wonder if it could form the basis for a more detailed model. If the quorns were beefed up, the window cils and lintels given addition layers, brickwork covered with plasticard and perhaps some individual slating on the roof, would this pass muster on a more advanced modellers layout? Maybe some guttering and drainpipes, better windows or at least ones with more depth might be a good idea. There wouldn't be any need to mess around with the kit too much, just use it as a shell to be clad. The card walls would be fine for stucco. If you needed more, paint them and pounce with talcum powder for texture.

I'm not saying this is on my projects list, but maybe somewhere there is a modeller who fancies a go. If so, let me know how you get on.
Posted by Phil Parker at 5:38 PM

The problem with all these types of kits are the 90 degree corners. No matter how detailed the printed model, the wall corners were the fold is evident lets it down. I don't understand why they don't provide a separate sheet of quoins that could be used to cover the fold, that alone would seriously improve the model.

I agree, a set of quoins would be a nice touch, although making individual ones would be easier than gaps between them would give a better 3D result. Lots of potential I think.

Hi Phil, I built this a few years ago and did a few modifications as you suggest when I built a full diorama for Davesville. Firstly the corners were shaded with a charcoal pencil, and gutters and drainpipes added from ratio. I also modified the base by pputting Metcalf pavers down and blending it into a grass areawith a swing and some etched wrought iron tables.
Lastly, beer barrels round the back, crates by the door and ivy growing up the walls/corners just finished it off. With everything you don't really notice the corners, but I have used cream textured card to make wuoind on a scratch build warehouse I did use Metcalf papers. Fiddly but looks goods.