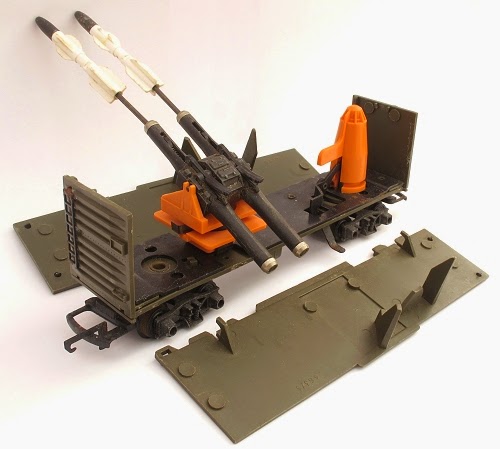 Behold. The Holy Grail of Triang collectables.
R571 "Q" Car
Produced in 1968, it's an exploding wagon that when open reveals a pair of "Red Eye" missiles. The mechanism swivels these into firing position when the sides come off.
Only 2,700 were made.
Price £345
I'll admit to being in awe of this. I have been a fan of the Battlespace range for years but this is the first time I've ever seen inside one of these. WM Collectables kindly lent the model to me for a few minutes so I could take some pictures for another job in the future.
If I had the money, I'd not have handed it back. This is hard core collecting at its best. Never mind your endless lines of diecast cars, when you've tracked one of these down, you are an alpha male in the collecting world.
And if I owned it, of course I'd play with it. I'd blow all those super-dooper finescale models off the tracks. This is what I call fun!

What a pity DCC wasn't around when this range was . Think of the added play value that could have added.

Good thought. Sound alone would make this even more fun to operate!