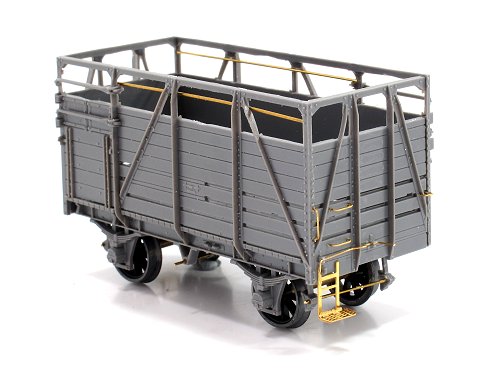 Four plastic sides, easy enough you might think, and you'd be nearly right. They have to be made into a 2 L-shaped parts as there is a gap along the bottom edge of each side. Only the door touches the floor.  It's not rocket science though and I like the way the angle irons on the side neatly match as they curve around onto the solebars.

At the ends, a lever is bent up from wire with the aid of a jig on the sprue. I managed to ping one length of the supplied 0.3mm wire into the distance. The replacement 0.33mm from Gibson proved to much easier to bend accurately. Maybe a different blend of metals?

From the etched part selection there's several handrails which on a British kit you'd be expected to bend from more wire. I'm not sure which is best, although the etched ones are nice. All metal is stuck in place with Zap green glue, which seemed to be working faster than normal, just when I needed a little wiggle time!