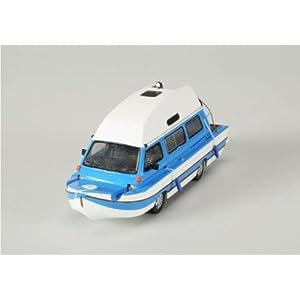 This blog does not normally cover die-cast releases, I can't get over the idea that's it's just blokes buying toy cars. However there is a new release that I covet - The "Top Gear" Damper Van.

Those with long memories will remember that I was so inspired by the combination of VW van and boat, that I had a go at building my own. If you don't remember then you can read about it in the archive. Be warned though, it wasn't one of my successful projects.

Anyway, Oxford Diecasts have licenced the entire set of amphibious Top Gear vehicles and these are now appearing in the shops. The cars/boats are based on those that the team tried to sail across the channel. This shows up in the Damper because of the colour (blue not green) and the higher pointed bow. The Mk1 I tried to model had a pointed end more akin to the canal barges normally produced by it's builders M&P Steelcraft.

Needless to say, this van will float about as well as my version did. All I need, is to find an excuse to put it on a model railway layout. Maybe a dockside scene as it's nearly 7mm. Or perhaps a boatbuilders with this part-finished in the shed. Hmmm.

Oh, and if you've just won the lottery, then the model is on my Amazon Wish List
Posted by Phil Parker at 1:01 AM