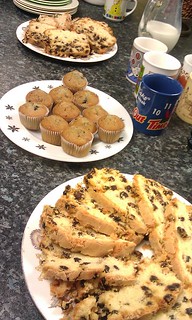 According to recent research, we need 7 portions of fruit a day, not the 5 previously recommended.

In terms of hard-hitting news, this can safely be filed under "No S**t Sherlock" as there can't be many people who hadn't worked out that more fruit and veg was better for you than less. It was probably a slot news day or something.

Anyway, you will be pleased to see that someone at the Leamington & Warwick MRS has taken this to heart because look what we found on the tea bar this week - lashings of fruit cake!

The members, also having read the research and taken it to heart, tucked in with enthusiasm and soon there were healthy modellers all around, stuffed to the gills with cakey currents and blueberries from the mini muffins.

Elsewhere, I had borrowed Kimble, the club O gauge layout, as a background for some photos of a model I've built.

While waving the camera around,  grabbed this rather nice shot of the engine shed from the station overbridge. 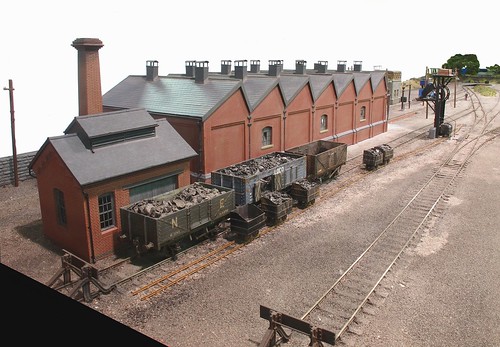 I've heard that Morrison's do a good take on this - doughnuts - in a variety of (mainly) fruit flavours - helpfully sold in "5 a day" packs.

They even offer them at a slightly reduced price if you buy 2 packs.

Very healthy, if you ask me.