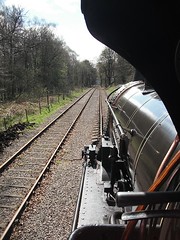 It will probably come as a surprise to many people who know me, but one thing I've never done, until yesterday, was ride on the footplate of a railway engine.

Obviously I've ridden behind all sorts of engines but as opportunities to sit or stand next to the driver are limited. Bothering someone doing a complex job to be allowed to clutter up the cab doesn't seem fair.

Anyway, for some magazine work I was at the Foxfield Railway and offered the chance to loiter in the cab corner travelling from the top station at Dilhorne Park to the terminus at Caverswall Road. While the loco is effectively coasting downhill all the way, I wasn't going to say no.

My steed for the trip was the 1874 built locomotive "Bellerophon". As one of the few engines I can picture in my mind when it's name is mentioned, this just made the opportunity even better.

The cab isn't large and nor is it protected from the weather. The day was sunny but with a cold wind. The front sheet might well be larger than when the loco was built but it doesn't wrap around the sides and the wind was coming across us. Heaven knows what it was like when the loco worked day in, day out, at Haydock Collieries. Either men were harder then or just knew that if they complained, there would be someone else along to take over their job.

Admittedly there is a nice warm fire and our fireman for the day toasted his hands by it briefly, but in such an airy cab, the heat soon dissipates - far more than I had expected it would. Having said this, from what I've seen, working hard on an express engine in more enclosed conditions was a far warmer job and not in a good way much of the time.

Our run proceeded at 15mph. I asked how fast and two smart phones were produced and GPS consulted, the loco has no speedometer, just vacuum and pressure gauges. Despite some sharp curves dating back to the lines origins as colliery railway, it was smooth too. A recent axle-box fettling and some interesting equalising beam suspension saw to that I guess.

Thanks to everyone who made this happen. I was well chuffed (pun intended). 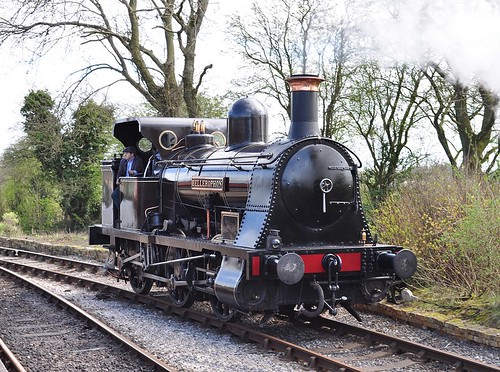 Being on the footplate is an amazing experience. To really appreciate how good it is though you should get yourself onto a driver experience session -- one of the best afternoons I've ever had was driving the Earl for a full return journey on the Welshpool and Llanfair Light Railway.

Bellerophon is an amazing machine.