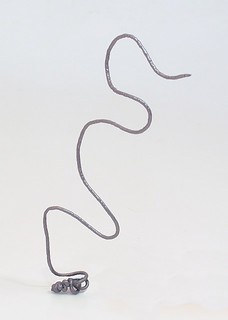 This 3D print stuff fascinates me. I'm impressed with the technology, if not as blind to the current level of development as many of a people on forums who see it as way of never having to do any of that fiddly model making.

One of the never ideas out there is the 3Doodler pen. It's not really the same as 3D printing, even though it's lumped in with the serious kit. That doesn't mean it's of no interest though. I'm always happy to tinker with a gadget with the idea it might have some model making uses.

Hanging around a quiet Maplin on a wet day, I decided to ask if I could have a play. Even though my total purchases were limited to some LEDs and a 9V battery snap, the assistant was happy for me to fire it up and hand it over.

The device is a fat, pen shaped object with two buttons and a fan. Basically, it's a hot glue gun that extrudes a plastic. Plug it in and the fan comes on. After a few seconds, the device is up to temperature and you can press a button to get started. Despite appearing to be forward and reverse, the buttons are just two speeds of extrusion.

On the advice of the assistant, I started my test by making a mound on the paper to glue my "model" to the surface. Then I drew a wiggly line in the air.

My line is 7.5cm tall and free standing. Working slowly, the plastic hardens fast enough to support itself withing a couple of seconds. The 1mm thick line is surprisingly strong too. My little doodle is springy and not at all brittle. I was impressed.

So, what use is this?

Not sure. Attempt two was a less than successful tree armature. Sticking branches to each other neatly would take practise and I had been using the tool for around 2 minutes. If it can be done, the finished tree will be flexible enough to take knocks but I'm sure strong enough to support fine gauze covered in flock powder. Thickening up the trunk could be carried out by drawing extra lines up it. 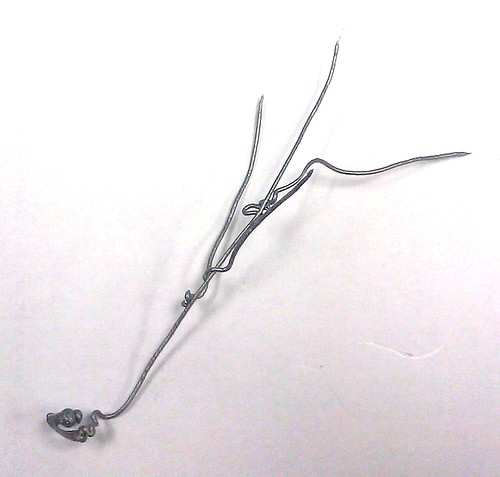 It's certainly an interesting tool. I didn't stump up the £99 to buy one, although if anyone wants to send one to me for proper testing, I'd be happy to devote more time to it.

With work, I wonder if a finner nozzle could be made to produce telegraph wires. Or rope for bunting. Or rope on boats generally. The plastic isn't elastic so won't stretch but I reckon there is way around this.

Interesting. Great fun to play with too.