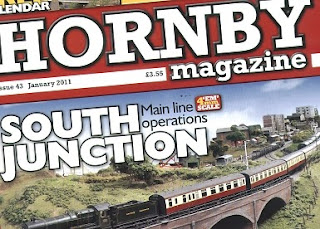 The January issue of Hornby Magazine arrives through the letterbox and it's good one if you want to know how I built a Parkshire bogie brick wagon. The main photo looks good, I've posed the finished model on Melbridge Parva and the foreground ground cover looks very good. Properly fluffy and with some nice flowers to brighten up the scene.

Elsewhere I've reviewed the portable spraybooth I now use while painting, and talking of this, Staff Projects covers the dropping of the Class 14 while doing same.

Should you want to read stuff that wasn't written by me (why ?) then I can recommend the Warley news section which reports on a heck of a lot of RTR models that were announced or seen in prototype form at the show. Worryingly I have kits to build for at least two of the items so I had better get a move on before the out of the box models arrive !

Best of all though, is that on Page 107, I have inspired someone to build a Killin Pug ! This is (for me) fantastic news as the reason I write all this stuff is to try and persuade others to have a go and get their hands dirty doing some model making. It looks like for once, this has worked. Rob Watson, who made the model, has done a very nice job on it too.
Posted by Phil Parker at 8:10 AM