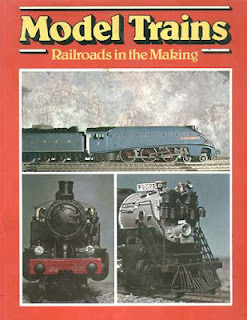 This is a very important book. It's the first model railway book I read. Not through choice, it was just that Young Phil was a regular at Whitnash Library and this was the only volume they had on the subject. I was working my way through the Famous Five series and pretty much anything else on the shelves of the children's section but this book caught my eye and I'm sure I borrowed it numerous times.

As a book on the subject, it's not great. The text began life in Italian in 1969, being translated to English 3 years later by Gerald Pollinger and published by Plateway Press, part of WH Smith. There was obviously some demand as the copy I now own was published in 1981.

The photos though are the things that caught my young eye. Once you get past the half dozen technical pages at the front printed on the roughest paper imaginable, it's full colour glossy all the way. Photos 1 and 2 show the Trix model of Der Adler.

I'd never seen a model train like this. My train set was a Triang 3F and some Graham Farish wagons. This was a tiny little model, crude to our eyes now but colourful and fascinating back then. I still aspire to owning one today.

The book continues with more and more photos of contemporary (for 1969) ready to run rolling stock. The first UK prototype is Photo 12 and shows a Hornby Dublo 2-6-4T. I didn't take much notice of this as opposite it was an American steam loco with inclined cylinders and fly cranks produced by Altini. It's weird. So weird I can't even find a photo on-line. The text mentions the most modern BR steam engine is the Leader class - an anachronism in 1969, never mind 1981 !

To modern eyes, the 112 photos show some very crude RTR models. There's a Dublo Deltic at 59 and while it looks primitive compared to the foreign stuff, not THAT primitive. Despite this, I'm sure I enjoyed leafing through. We didn't go abroad for holidays and so this was one of the few ways I saw continental trains. Of course I didn't know at that point that if you were interested in British trains, admitting there were any in other countries  is tantamount to admitting that you are a devil worshiper.

Towards the back of the book rolling stock and scenic items get a look in. I do remember being fascinated by a train of Italian wagons loaded with road building equipment. Maybe the yellow plant caught my eye or maybe it was just different enough for me to remember. There is a hint of incongruity with a steam traction engine loaded along with diesel ground levelers.

I also remember liking a close-up view (Photo 105) showing a Marklin van being loaded by Merit staff with English labeled oil drums and milk churns. Perhaps this influenced my love of detail and cameo scenes on model railway layouts.

Maybe if the library had stocked Guy R Williams scratchbuilding book then I'd be making stuff for Pendon by now. That probably wouldn't have been in the children's section though !
Posted by Phil Parker at 6:00 AM

I have an early seventies edition of this book (possibly the first English translated edition) that I received for my tenth birthday in 1974. At the time, the only readily available and advertised items in our shops were made by Hornby and Lima, but this book was filled with makes and marques that I had never heard of back then - Märklin, Fleischmann, Rivarossi etc. It really interested me in the hobby, and I received my first serious model train set, a Lima Indian-Pacific set, for Christmas the following year.