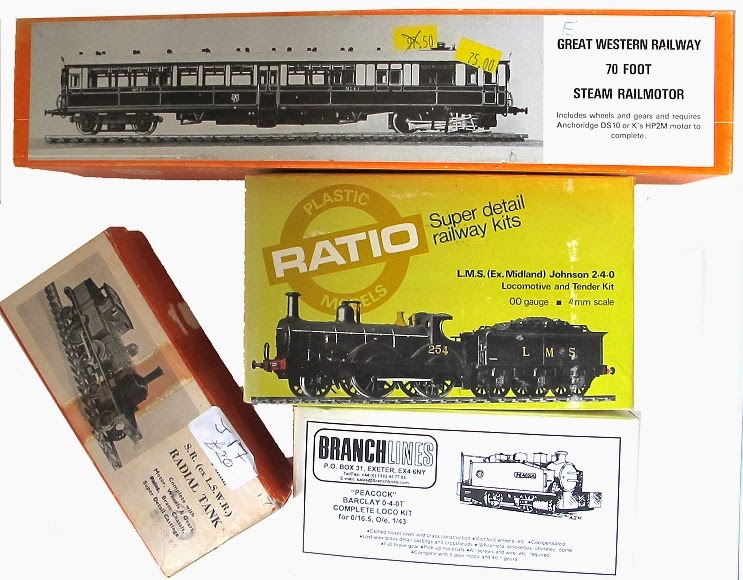 All things being equal, I'm planning to spend most of October on the wrong side of the world. I've been invited to give a talk to the British Railway Modellers of Australia and since it seems daft to fly out there for 3 days, I'm going for a couple of weeks with stopovers in Hong Kong on the way there and back.

This means a dearth of modelling going on - you can't do a huge amount in a hotel room with a trouser press and no soldering iron. I am aiming to drop in some updates from Aus, the specification for the hotels included an en suite shower and WiFi, but who knows if the foreign interweb is the same as our good British version? A trip to the national railway museum is on the cards for a start.

Anyway, if I want to keep the up the post-a-day schedule, then I need to line up some reading in advance for you lot. The easiest way to do this is to built a loco kit as this serves up loads of posts in a modest amount of time. That's important as I have to fill up quite a lot of magazine pages before I go too.

So - a dig in the unbuilt kit box unearthed the selection above. What I want to know is, which one would you like to see built?

Nu Cast GWR Railcar: Complete but unstarted. I even found a DS10 motor for it. The model is mostly whitemetal and looks nice. There's scope for some detailing and the waggly bits could be interesting.

Ratio LMS Johnson 2-4-0: A plastic locomotive kit. The wheels are horrid Mazak so will need to be replaced, a shame as they use a funky split axle pickup system. The motor is a 50p jobbie too so that might not survive.

K's SR Radial Tank: Bought mostly finished, there probably isn't much building in this one.

Branchlines "Peacock" O 16.5 shunter: Unstarted and a nice looking kit. Complete with all its bits.

I know which one I fancy but thought I'd throw the discussion open to anyone who wants to put something in the comments below. I might take notice or I might not, but you could persuade me. You'll find out the result in October...
Posted by Phil Parker at 5:30 AM

The ratio kit looks interesting, I wonder why we don't have plastic loco kits? However I'd like to see the Branchlines kit built, and tell us if it could be built to 14mm gauge!

Hi Phil - I'd like to see the Ratio 2-4-0 built. I've had one of these unbuilt since about 1988. Apart from the dodgy plastic frames the moulding looks generally coarse too, especially those boiler bands. I'd love to see it built & looking good to inspire me to build mine!

Phil, The GWR steam railmotor would be topical see There is also the Walschaerts valve gear to tackle which might inspire other models to have a go at a more complex loco kit.

I have to vote for the Ratio kit. I always wanted to build one when I was young, and wanted to model the MR.

I like the look of the GWR railcar personally. It's one of those obscure things you don't often see.

I would like to see the GWR Railmotor built - probably because I am a GWR man and have always fancied owning one.

I like the look of the Railmotor personally, interesting motion to model and nothing extra required to be sourced.

The Ratio Midland loco is not a good kit. It needs metal chassis rather than the one they provided.

The body of mine looked OK but below the footplate was dire and never worked well.

I'd flog it on eBay and get an etched kit.

I'd love to see you tackle the GWR Railmotor...I have one to build early next year and I would like to see how a proper modeller goes about it!

Phil, definitely the rail motor, and hope you have a great time on your trip!
Geoff
( Brisbane Qld)

Hi Phil, he steam railmotor gets my vote, especially has we need one for the latest club layout!
Very topical as well at the moment with Didcots unit being very popular.
What livery though? Plain maroon or chocolate and cream?
Cheers
frank