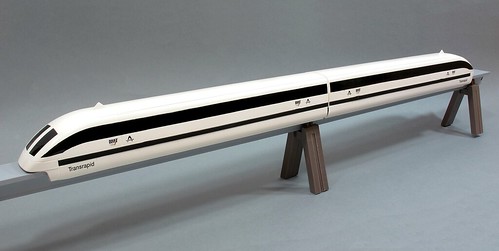 I've always been fascinated by Maglev and monorail systems. In model form they are rare, but a few hints saw me receive a tatty box containing the Revell HO scale model arrive at Christmas. There is a dusty corner of the Hereford Model Centre that is a little bit emptier now...

The Transrapid concept was developed in German around the turn of the century. Sadly, despite the prototype information in the model's box, the only working application is a short line in China. The planned links in Germany lost out to conventional railway systems - you can build an ICE train cheaper than a fancy-pants monorail maglev system and travel sufficiently fast for practical purposes. Even the Emsland test facility has been scrapped.

Full history can be found on Wikipedia.


The model is a pre-painted plastic "kit" designed as a desk ornament. At just under half a metre long, it's an impressive beast. Detail is limited, just like the real thing, although electromagnets are moulded underneath the "track" if you look underneath.

Conversion to a working model might just be possible. You need to plan on making something that looks right rather than is right. The air gap on the real Transrapid is 10mm. Scaling that down results in a gap best described as bu**er all. This pretty much rules out proper maglev working as you'd need an overscale gap and the thing would probably move oddly.

Get past this though and I can see why wheels shouldn't be fitted inside, picking up from wipers operating under the track.

Two sections of track are supplied and as far as I can tell, spares were never available. Making your own wouldn't be too bad although some experimentation would be required. Apparently pre-fabricating standard sections on the prototype isn't as easy as it looks, everything to form a curve has to be bespoke.

For the minute, this is just a collectors item, but I am sure a Maglev model will feature in my future.

Take a look at https://www.youtube.com/watch?v=H-uGOlkLiE8 for a workign model

James. Interesting, the details are here: https://www.youtube.com/watch?v=RbRUpBo-tls Basically, some magnets to provide lift in a "train" in the track. Neat solution and clever.

I was thinking along the conventional lines of wheels hidden underneath, but avoiding the power issue by onboard batteries. The speed wouldn't be great, but it would be possible I'd have thought

I've always fancied doing a monorail layout (I did some concept models years back for a Steampunk-themed layout), I was working on the idea of a conventional chassis running on N gauge or even Z gauge track, with larger scale bodywork, with the rails disguised in the beam. What put me off though in the end was the issue of pointwork, and the complications there. It would make an eyecatching feature on a big exhibition layout though, having a functional 'modern' monorail or maglev (or even something retro like the old Birmingham Airport one). I wonder if it was just an end-to-end could it work with a small radio-controlled car chassis buried under the skirts?