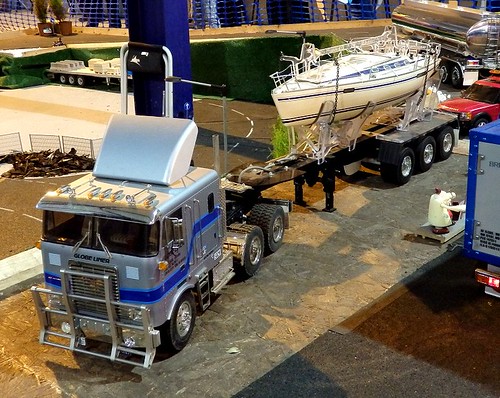 "Why are there radio control trucks at a model boat show?", people asked.

Having seen the trucks before, the answer seemed obvious. They are terrifically entertaining, certainly more so than another few stands of static boats, many of which are making a return visit to the show.

That probably sounds cruel, but this is an event that deserves a shot in the arm and the organisers decided to take the brave move to open it out a bit. Therefore, in front of our stand was a large working roadway with trucks noisily travelling around. The public loved it and there were loads of films made on mobile phones. With the ever popular boating pond at the other end of the hall, I bet that there were many more satisfied customers, at least among the general public. While this might not satisfy the purists, if hobbies generally are to grow, we need to engage people.

My only complaint is that there wasn't really any specific trade support for the trucks. Not through lack of trying - hopefully this will change next year as the word spreads and R/C truck fans start to visit. 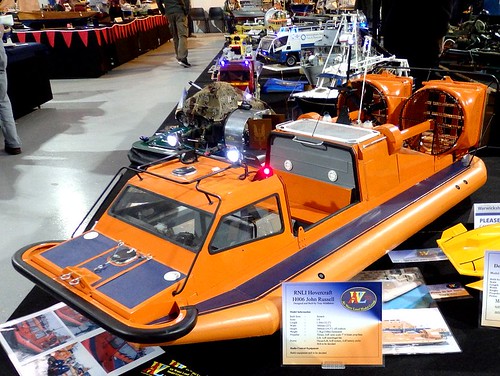 With my engineering hat on, I noticed a few non-boat display items appearing on other stands too. Again, not a bad thing, but you wonder how long before we have a general radio control show? The site would be perfect for some off-road car racing. If they kept the marque from the ME show a few weeks earlier, there would be plenty more space for aeroplanes too. 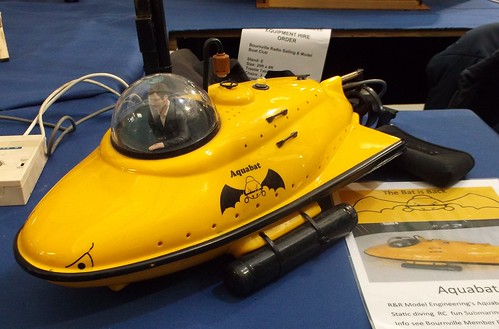 I only made it to the Sunday this year, and even then forgot my ticket so had to pay to go in. The minute's silence was much better handled this time although the guy on the Surface Warship stand had less excuse than everyone else not to shut up. Eventually, he realised but I'm afraid when you are surrounded by grey boats all weekend except at that point as they are all on the water, then you shouldn't need telling.

Being a Sunday only person removed the one bit of temptation - a springer tug hulled ferry on the (new to me) Omega Model Boats stand.The price was good and it looked fantastic. They only had one and it sold before the show opened. I wasn't the only person glad of this!

Anyway, the upshot of all this is the variety of models in my Flickr gallery is very wide this year. Something for everyone!