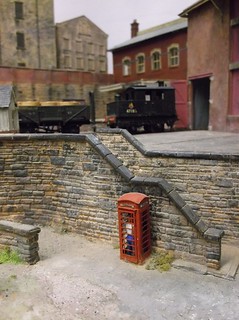 Scaleforum takes place in the same venue as Railex but is marketed at members of the Scalefour Society. The layouts invited are all P4 and the trade represents this finescale market.

All this means that numbers are lower than you'd find at a comparable exhibition - which is a shame as it's not a bad show. My suspicion is that the Finescale (with a capital F) side puts off people. Or maybe the sort of people who might enjoy access to trade selling stuff for making things are reducing in number.

The feel is a lot more laid back than most shows. There are no barriers in front of the models for a start. This (apparently) to improve access but I suspect might be more to do with hire costs. Personally, I hate exhibiting without something for the punters to lean on because they still lean, but on the layout. And don't tell me enthusiasts are better behaved than the general public because I've seen them and they are worse.

One thing that always amuses me with P4 layouts is that some builders are perfectly capable of building the most superb trackwork and rolling stock to run on it but struggle with other aspects.

In a couple of cases, the struggle was with the colour of grass. They were exhibiting a colour described by a friend of mine as "Sellafield Green".

The society sells P4 as a holistic approach where the modeller strives to produce the finest quality over the whole layout. I'm not sure that a well made OO layout with consistent standards wouldn't fit the description better than some "proper" P4 models I've seen in the past, although not this year.

Anyway, there were some nice looking layouts. Despite the scales reputation, most of them worked very well too with no falling off, hesitation or signs of operating sequences full based on a quiet Sunday morning. 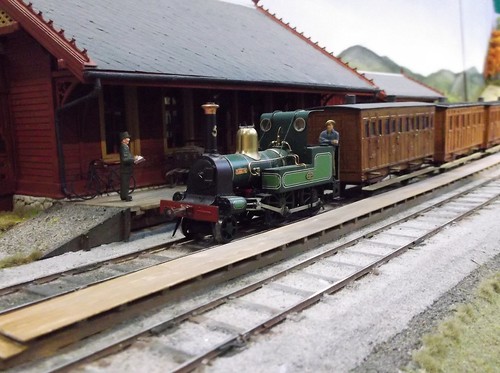 Guest non-P4 layout Fangfoss wasn't working when I saw it but the loco was clearly from the same builder as those found on the Isle of Man. I'd read a little of their history but this was the first time I'd seen a model.

Shopping was very good though. For the first time for years, I went with a list and bought everything on it reasonably easily.

So, if you are a practical modeller, assuming Scaleforum advertised this time next year, you don't have to be a member to get in so give it go.

I've never been to Scaleforum itself but I can recommend S4 North. I've been a couple of times now and I like the relaxed atmosphere and the mostly high quality layouts. I say mostly because there are a few that don't take the 'holistic' approach and seem to be happy to mix fine track and wheel standards to some frankly awfull modelling. Ho hum.

Another good reason to visit is for the trade, not just kits but tools and bits to actually make things with.

The first three Isle of Man Railway Beyers were all but identical to the Norwegian class IV introduced in 1866. The main difference was gauge. Norway's internal railways were largely built to 3'6" gauge, whilst the Isle of Man is 3' gauge. When the original set of drawings turned up in Douglas they were labelled "Norwegian Tank Locomotive."