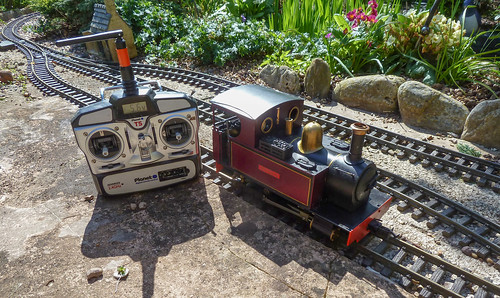 One benefit of clamping those rails together is that my live steam Ragleth can finally have a run on my railway. In the nearly 2 years I've owned it, the model has been in steam less than 5 times because I simply haven't had anywhere to play.

Anyway, all this can now change. Well, it could as soon as I changed the locomotive gauge anyway. 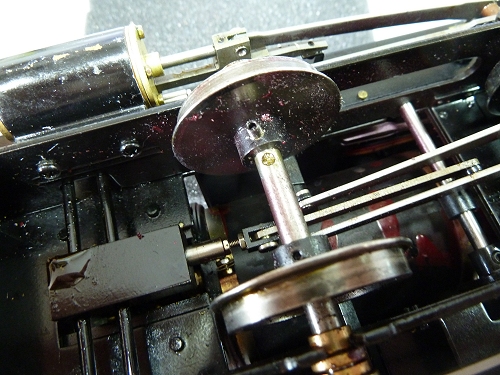 If you can wield an Allen key (I always have to look up that spelling) then this is easy for an Accucraft loco. Undo the bolt, wiggle the wheel and move it so the hole lines up with the deep dimple on the axle. No need to use a back to back gauge. The wheels did take quite a wiggle, but I suspect that's down to them not being changed for years.

On the track, I fueled it up with gas and boiled but cooled water. Then I lit the burner through the smokebox door and waited.

Sometime later, I realised that the sound I heard was gas coming out, not the burner burning. Once you know, it's obvious, but as I say, it's a long while since I steamed anything. The sounds aren't that different anyway.

Burner lit, steam pressure was raised and off we went. Ragleth will hurtle around when not hitched to a train, but proved with a bit of practice to be reasonably controllable, even for a novice.

There is a definite gradient at the back of the circuit which could really do with some adjustment, but it kept me paying attention, even if it did make single-handed filming tricky. You need enough speed to get around, but that means the scenic bits are covered faster than I'd like.

I also need to get control of the burner. Accucraft locos are notorious for having the paint burned off the smokebox door by newbies winding the fire up to full power. I found that the amount of gas required was tiny and turned it off a couple of times trying to reduce the flow. As I say, I'm still learning.

Anyway, a happy hour chuffing around. Next time I'll add a train to the mix.

Chuffed 2 Bits sell a slightly more refined gas jet too which isn't too involved to change. No worse than a spark plug.

I've been thinking about this so thanks for the recomendation.

No worse than a spark plug? I'm trying to get the stupid things out of my Beetle at the moment...