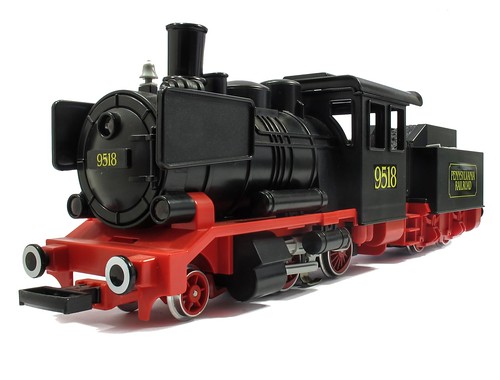 You can't take my dad to a model railway exhibition - at Leamington, he decided that my inheritance should be spent on this Playmobil G scale locomotive.

It's an interesting model. As far as I can tell, Playmobil 4052 is a pastiche of a typical German freight locomotive and I'll admit I like the look of it, a kind of cartoon loco. 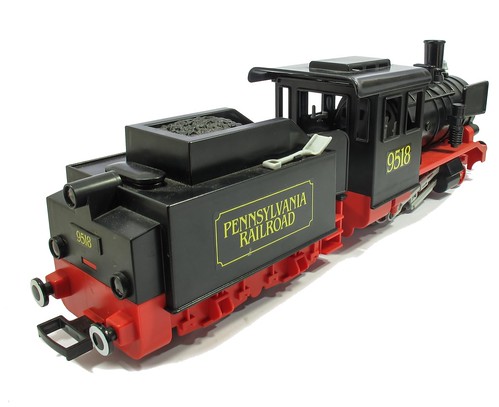 But, this model has "Pennsylvania Railroad" on the tender. It seems this is the loco from the 4031 Steam Freight Train set where it masqueraded as an American loco along with a pair of cattle cars and some little, plastic cowboys.

Looking around on-line, I think my father was unexpectedly canny. Prices for this model, especially in good condition, are around twice what he paid. However, this is very much not for sale. A quick test on some Playmobil train set track on the living room floor (yes, we have a new train set, that's for the future) showed it's a terrific runner.

Out in the garden, it looks even better. Those LGB underpinnings (the tender is on a de-motored standard 4-wheel loco chassis) are silky smooth and despite simplification, the waggly bits look pretty good.

OK, it's not finescale by a long way, but as a fun model and at 60cm long in total, not a huge one, it's nice addition to the fleet.
Posted by Phil Parker at 5:30 AM

I have an old Playmobil RC chassis awaiting a 7/8ths body. It has been a long wait, twenty years so far...