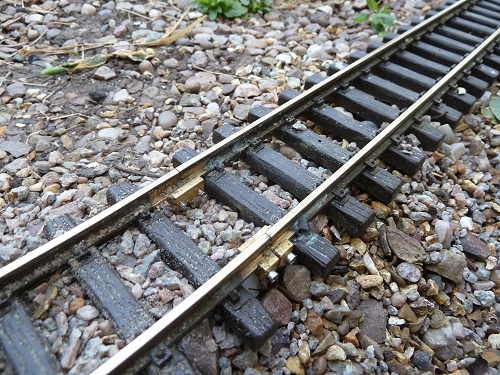 I've never run the garden railway as much as I should. Starting any session always involves messing around chasing fishplates that aren't conducting electricity, or LGB track sections that have magically disconnected themselves.

The worst area for this is along the back of the oval. Fixing this involves crawling between fence, pond, pear tree and rose bush. Basically, a whole load of no fun.

So, last year I bought some rail clamps. And because I now have plenty of time, I fitted them.

The track was lifted, fishplates were brutally removed with pliers and the rail ends polished with Brasso using a Dremel and felt pad. The shiny metal was cleaned with Cillit Bang and loads of water as the polish can leave a coating.

Then I clamped up 5 ft sections, carried them to the site and joined everything up again.

Only the difficult to reach areas have been done so far, but the results were impressive - trains ran straight away - so if expansion in the sun isn't too much of an issue, I'm going to do a lot more.
Posted by Phil Parker at 5:30 AM