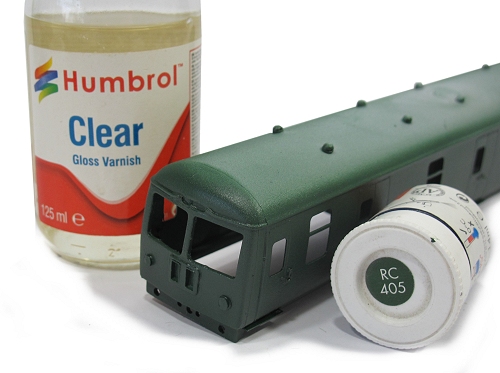 Paint time. The shell was primed using some etch UPol stuff that decided to dry with the texture of fine sandpaper on the roof. The sides were OK especially after a coat of acrylic followed by some Humbrol Clear.

The good news is that my airbrush is playing ball. I really thinned the paint with cheap car washer fluid (a trick from the military modellers) far more than normal and it flowed perfectly. The Clear was used neat and again, worked well. The finish isn't gloss by any means, but a nice eggshell. 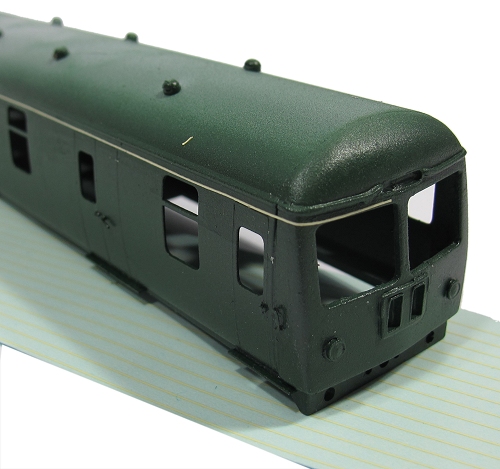 Then it was transfer time. A fresh packet of lining from Fox and the first line went on OK.

At this point, I nearly smashed the thing against a wall. It took all my willpower to put it back in the box, tape the lid down, and put it back on the shelf.

I hate this model. I hate it with a passion. What was going to be a fun project that wouldn't take too long has become a bind. It can go away for another 4 years as far as I'm concerned. Maybe then I'll be in the mood to finish the stupid thing.

Hang in there Phil!. It's looking good and I'm sure it will look great when you do get to finish it!

I've been following your posts to see how far you would get. Well done in getting as far as painting!

It was an MTK Glossop-Hadfield EMU which defeated me. That was the kit that made me decide to start scratchbuilding. Far cheaper and all the mistakes are my own.

And I am old enough to remember the same manufacturer's O gauge kits although, as I was then into 4mm scale I was spared having to build one.

Now go and enjoy yourself with something different :)

Paul - Ready mixed and the cheapest I can get. Not because I'm stingy, but because that's what the experts told me to do. It seems to work though.

Everyone else - The project will be back, but not for a while.

The project will be back - but not for a while - does this sound a bit like the GWR Steam Railcard???????

Oh yes. I found this the other day. I just need to work up the courage to look back in the box.