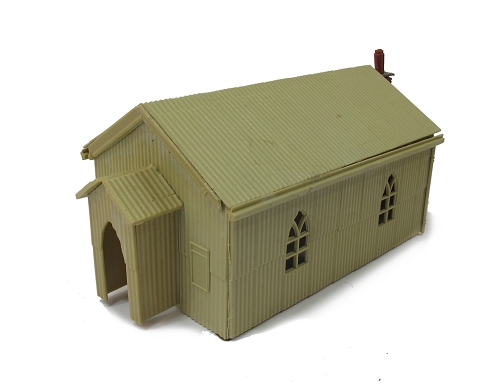 Soppy Phil sometimes spots waifs and strays on stands at model railway shows and buys them to save the poor model from the bin.

Two quid saw me acquire this badly built Wills Tin Tabernacle at Stafford I think. My idea was to have a bit of fun with it for the blog.

Well reader, I tried, but sadly I was defeated. 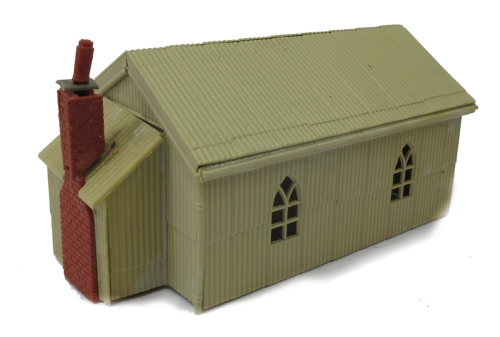 Whoever had put the thing together in the first place used tube cement, and plenty of it. All my efforts to gently prise parts away from each other failed miserably. Shards of broken plastic were my reward for the attempted rescue.

Even the brickwork was firmly fixed together - that wonky chimney isn't lose, it's solid - couldn't be pulled apart, and that stuff is usually a bit more flexible than the corrugated plastic.

So, it's another failed project. I don't feel too bad, at least I tried.

Pity about this as I've always liked the look of the kit. I'm sure there is one stashed away somewhere for me to build properly. I just need to concoct a reason to do it...
Posted by Phil Parker at 5:30 AM

Email ThisBlogThis!Share to TwitterShare to FacebookShare to Pinterest
Labels: buildings

Is it too badly built to be turned into a derelict structure? Rusting metalwork, unglazed windows, covered in climbing plants to hide the bad joins, wonky chimney collapsed to the ground?

Sadly, it was all wonky in the wrong places. There's a difference between a badly made kit and a collapsing building. More to the point, my efforts at dismantling weren't very successful. Never mind, there's always another project!

Just out of curiousity, what methods, solvents etc. did you try?

I can't help wondering if there might perhaps be some mileage in doing a magazine article about different ways of dismantling "lost cause" kits / models.

I'm sure there must be lots of methods - and potential solvents available - including some that I haven't tried / heard of.

It's possible that some "botched" builds might yield parts that you might be able to be "Frankenstein" together into something completely different - with potential scope for a revival of the "kit rescue" magazine articles from a few years back.

Other kits might not be suitable for this treatment - in which case someone like me might even be tempted to chop them up into rough sections and try different "treatments" on different bits.

Ultimately, for this sort of thing, you wouldn't even need to be looking at model railway kits.

All that would really matter here is whether the concept is actually workable - and I'm not sure that I'd be the best person to answer that.