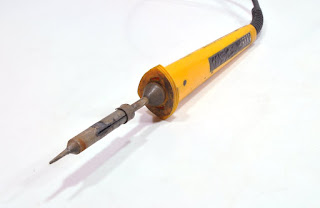 Choosing a soldering iron is an interesting job. There are loads of cheap irons to appeal to beginners but the wrong tool can make the learning curve a whole lot harder.

The first thing to realize is that there are two types of iron - those with the heating element inside the bit and those with the bit inside the element. The cheaper irons tend to be the later, which is less efficient. They work though and many people are quite happy with them.

With soldering, size matters. Too low a wattage and you'll struggle to heat anything up, especially if you aspire to making an etched kit. I recommend for most modellers at least an 18w iron, preferably 25w. Keen types like me go larger still, the one on the photo is 45w but that's probably overkill if you just plan to do some wiring. My 25w iron lives in the exhibition tool box and is more than fine for trackmaking and wiring.

Bit size also matter. The photo shows and very small bit fitted to the iron. That's because I've been doing some detail soldering on a kit. The standard bit supplied with the iron - usually 3-4mm wide and chisel shaped - will be fine to start with. Cheap soldering stations often have pointed bits which are hopeless, you can't carry enough solder on them, so you end up spending more to buy a spare set that will work.

Finally, cable length matters. Soldering stations often have little more than a foot of cable which isn't enough for wiring as you'll spend your time lifting the heavy transformer in the air. Far better to have at least a metre of nice silicon flexible cable. The exhibition iron is fitted with 6 feet of cable so I can reach over the layout.

My choices come from the Antex range. They are tough and reliable. I started using them because a friend who worked for British Telecom used them, for the reliability. BT didn't want engineers stopping work because of a duff tool.

I like the range of bits which are readily available from model railway tool suppliers such as Squires Tools. Replacement heating elements can also be acquired and fitted with nothing more than a screwdriver. I've only ever replaced one bit, which considering the amount of use my iron gets, is pretty impressive.

Don't forget you also need a stand to sit the thing in, with a sponge that should be kept damp so the bit can be cleaned regularly. The ones we used on the course came from Toolstation for just over £3. Wiping the bit will be fine to keep it clean. Don't use a file - you remove the special coating that allows the solder to flow.

I have to agree re your comments about the Antex irons. I have both an 18W and 25W versions that I purchased over 20 years ago and apart from replacing a couple of tips are as good now as when I bought them. I did replace the mains flex on the 25W version for a much longer one for the same reasons as yourself, stretching over the layout both at home and at shows.
I also recently purchased a temperature controlled iron from Maplin in one of their "sales" and must admit to being impressed with it so far, time will tell if it will be as reliable as the Antex
Cheers!
Frank

I'm another Antex user, and like Frank I have both 18W and 25W models. The 25W is fine for most (4mm scale) etched work that I've attempted so far, only running out of oomph on a large bogie hopper wagon.
I like the fact that its light in the hand, the element is in the tip, and spare tips are readily available. You can get replacement elements as well, fitting a new element is something that I've covered on my blog: http://paulthehalfwit.blogspot.co.uk/2015/01/antex-xs25-element-replacement.html

Never had a problem with Antex, and thier service on line is top notch too.

I have a Draper 100w gun as well for the odd large items... Just takes a bit of practice to get used to that!