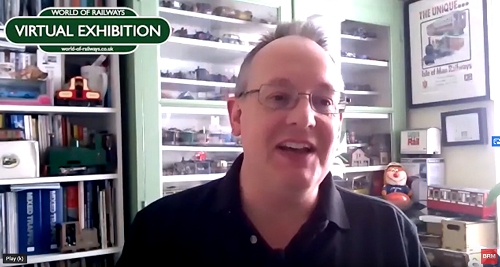 Coronavirus has changed many things, but who knew it would need me to curate my bookshelves?
Behind me in the tiny office I use, is a bookcase full of A5 publications. Normally it's a bit of a dumping ground but that has to change - because you can see it in video calls.
I'd not worry about this except that I've had to do a Zoom-based interview for the upcoming Virtual Model Railway exhibition. Like politicians around the country, the background now matters.
I've not shuffled The Art of War and some weighty political memoirs into view, nor is there a weird picture of the Queen hung up. You'll have to decide if the 3mm scale society house magazine Mixed Traffic says something good about me.
Luckily, I'm well supplied with large scale locomotives to appear. Out (of sight) goes the La France fire engine. In comes a Saltford Simplex. RNLI toys are replaced with a battery-steam loco I built many years ago. The Garden Rail van is a subtle advert - at least I think it is anyway.
The Isle of Man poster on the wall was already a fixture, but Mr Kipper from the Isle of Man Steam Packet Company has caused some comment!
Posted by Phil Parker at 4:30 AM

Phil
Thank you for the mention of mixed Traffic. Of course it says something good about you .Shows an interest in Minority scales where you actually have to do some modelling.
Richard A 3mm and 7mm N G modeller