On a bed of Milliput 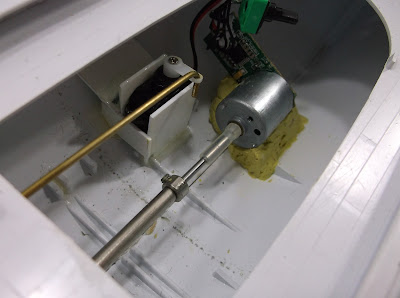 A gutted servo isn't the easiest thing to mount in a model boat hull. Admittedly, I could have removed the motor from the control board, but it wouldn't help that much.
Inspiration struck when I pondered sitting it on a carved balsa wood mount - then realised that a big blob of something would do. A bit more thinking and I remembered Milliput.
I've never been a fan of the stuff. It frequently doesn't seem to go off when I use it, but needs must. I sliced off a couple of portions and mixed them for 15 minutes while watching telly. Most of my mix was shoved in the hull and the motor pushed in to it.
Some rubber tube is acting as a coupling and since the gear on the motor isn't very big, I've tried to keep it under compression from the end of the shaft.
The blob was cleaned up a little with a damp spatula. It looks ugly, but seems to work remarkably well. The Milliput has hardened and when I give it juice, the prop rotates. Now I need to get the model on the water.
Fun Fact: I you are visited by Royal Protection Officers, and they spot two sticks on Milliput wrapped in their greasy paper but not in the cardboard carton in the top of your toolbox, their faces go a funny colour.
Posted by Phil Parker at 4:30 AM