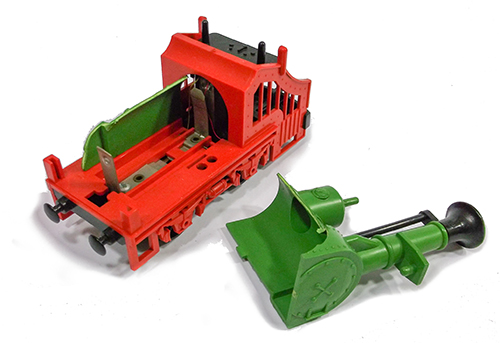 The Mini-Train is broken in many ways. For a start, the boiler unit has been dropped and broken in half. That's pretty terminal for most people, but not someone armed with a bottle of strong-smelling MEK.

The solvent quickly restored the parts, but not perfectly. Not enough for a collector, but fine for someone happy to do a bit of filling and planning a repaint. 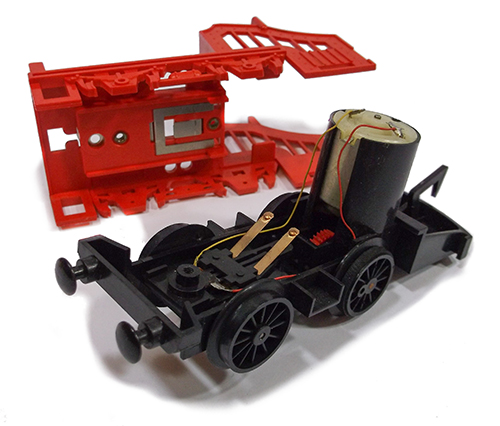 A bigger problem is that even when loaded with a fresh C-Cell, the motor didn't spin.

Taking the model apart by undoing a single cross-head screw underneath and then wiggling the red frame clear, exposing the motor. It's a horribly cheap one and I was confident I had a suitable replacement in stock somewhere.

With this in mind, I desoldered the wires and peeled back the retailing tabs on the plastic end. Carefully pulling it away, I could see that the commutator and brushes were covered in sticky goo. My guess is some grease that has solidified, but it looked capable of stopping electricity.

Wiping everything clean with a bit of kitchen towel soaked in WD40 did the job. A quick polish with a fibreglass pencil and all seemed well.

After reassembly, the motor was rigged up to some power via flyleads and slowly turned. After a few seconds, it speed up and ran sweetly. A little oil on the bearings and everything seems fine.

Back in the loco, there was a little fiddling with the contacts in the switch, which is underneath the loco, and I have a working model. This sort of "toy" is pretty simple and easy for the amateur to fiddle with so it's always worth having a go.

My plans now involve fitting a more convenient switch and detailing the body. To which end, a big order for bits has been placed, but I may have to wait a bit for delivery.
Posted by Phil Parker at 5:30 AM

On the subject of switches, I'm planning to retrofit my Faller locos with the loco-remote RC system that can be controlled from your phone,or even an old phone dedicated to the purpose. If it works as promised I then might retrofit some more 16mm battery locos.

I'm also interested in this - especially after editing an article on the topic into the next Garden Rail.