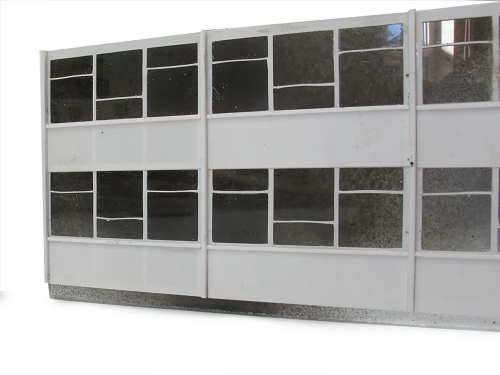 When I was building the office block for BRMs Runcorn Salt Union layout, I suggested on video that to hide the lack of interior, some car window tinting film might be a good idea.

Where this idea came from I forget, but in the end, I just set some black cardboard back a few millimetres behind the window as I always do. It works and meant I didn't need to hang around auto shops trying to find someone to pimp my building.

The idea didn't go away though, and since I had a spare side, rejected for wonky glazing bars, when I happened across a spray can of Humbrol Clear Smoke, I decided this would be nearly as good. Quite a bit cheaper too as the can only cost me a quid.

Paint was applied to the back of the windows and you know what? It looks rubbish.

The blackness is too close to the glass and just looks wrong. My normal method is the better one. At least I know now.
Posted by Phil Parker at 5:30 AM

Long time ago, I attended an NMRA talk on contest modelling and judging.
One member had benn advised that, if he were modelling a house with no furniture in it, he should put a "For Sale" sign in front of it.
Yes, in those contests you get points for what can be seen through the windows.

have you considered microscope slide, some of which are shaded? Years ago I saw Halifax Kings Cross aand another layout at the York Show and both used theses slides- the former for platform canopy glazing, the latter for high rise/office glazing.