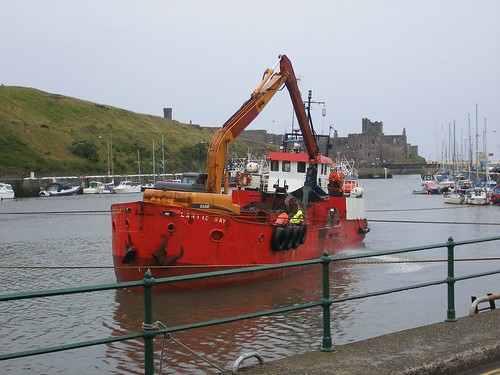 Spotted in Peel harbour back in 2008, this is the Atlantic Bay dredging away.

The business end seems to be a fairly conventional digger parked on the deck. It grabs a bucket-load of the seabed and dumps it in the hold. Presumably, there is then a way of discharging this out at sea. Surely they don't dig it back out again?

I've always been confused about how they know they have dug the entire bed. The ropes fore and aft tied to the quayside I assume act to position the vessel accurately, a bit like the mechanism that moves the print head in my inkjet. Maybe it doesn't matter if you get everything as the movement of the tides will re-distribute the silt, filling holes and flattening mounds.

This isn't a huge boat and would look great on a model. You need a diecast excavator and a boat hull. The result would be much more than the sum of it's parts and appeal to a wide variety of enthusiasts, far more than just a cargo vessel.
Update: James Finister has donned his deerstalker and worked out that what I thought was just tired signwriting isn't. The ship name really is Lantic Bay and you can find out more about it here. And track it here.
Posted by Phil Parker at 5:30 AM