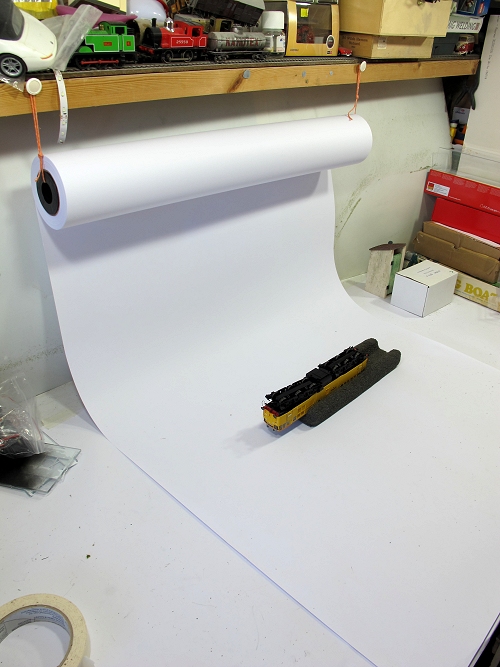 For the last few months, my photo setup has included a roll of printer paper acting as a background. Since adding this, I've saved ages over previous attempts at providing this - to remove all the background for construction shots often involves nothing more than a tweak of the brightness and contrast settings.
When the paper gets dirty, I just unroll a bit. Cut off the old stuff and am ready to go again.
The only problem is that the roll is only 61cm wide and I now have a small layout project in prospect. Worse, that's going to require video and you don't get to do cut-outs on moving images. I need a white background.
So, needing to upgrade to a much wider paper roll in a hurry, I rang around a few places. One said it was delivering on the website, but when I spoke to them, the warehouse is locked down. Another was going to call me back, and didn't.
The winner was Graphic Design Supplies Ltd in Macclesfield. A very helpful chat resulted in a 5ft wide roll being delivered the next day. All I have to do is work out how to support it. Bits of string won't do the job!
Posted by Phil Parker at 4:30 AM

Email ThisBlogThis!Share to TwitterShare to FacebookShare to Pinterest
Labels: photography

Good idea! My usual method of a placing whatever I want to photograph on a bit of coloured card in the garden works well enough, but very weather dependent. I need an indoor solution as it rains a lot around here.

Broom handle on some supports maybe? It's hard to say without knowing the diameter of the hole we are dealing with.

It turned out a broom handle wasn't long enough, but a spare length of plastic pipe was. It's now hung under the shelf on one end and supported in a bracket made from old kitchen unit plinth at the other - and working brilliantly.

That's one advantage of usually building small models; I can usually get away with a single piece of A4 paper propped up against something on my desk with the daylight bulb in the modelling lamp to light the scene. Might have to steal this idea though if I start building larger models.